Coronavirus (COVID-19) Updates:
Visit our coronavirus page for up to date information relating to your holiday
Find out more about travel wellbeing and border requirements

Please note that Puy Du Fou opens from April to September every year.

Steeped in the history of France and Europe, Puy du Fou offers an unparalleled experience, presenting its visitors with a series of spectacular and utterly moving shows staged in the heart of the immaculate Vendée countryside.

Voted Best Park in the World in 2012 and 2014, Puy du Fou has developed a unique concept that has seen incredible success. Away from virtual or imaginary worlds, Puy du Fou's grandiose and spectacular shows and scenery tells the historical journey of man through time, entertaining everyone of any age by taking them on a totally unique journey.

We are passionate about our products and the Puy du Fou ranks very high on our lists of favourite destinations. We will tailor-make your time at the Puy du Fou, organising your transport there, advising you on the best accommodation to suits your needs and in making sure that you have all the information you require to have the very best of time in this incredible parc.

Give us a call and we'll do the rest!

From inside shows to outdoor theatrical performances, Puy du Fou features no less than 28 attractions within its grounds. You will need a couple of days to be able to enjoy it all. Brilliantly organised, you will never have to queue very long in the Grand Parc to access the shows.


Le Premier Royaume (inside show) - It’s the 5th Century AD. The Roman empire is in peril and the quest to discover the first kingdom has begun. Journey back to the world of the Merovingian dynasty and watch in amazement as Clovis, the young King of the Franks, battles the barbaric Attila the Hun in this marvellous show!

Le Mystère de La Pérouse (inside show) - In 1785, sail on one of the ships of the explorer La Perouse. Leave Brest harbour and escape to the sea to discover unknown Lands. On board the vessel, take part in the great discoveries, from the Cape Horn to Alaska and Vanikoro ( Solomon islands) and weather the most impressive storms! You will live and witness the mysterious journey of La Perouse!

Le Dernier Panache (inside show) - follow the glorious destiny of a French naval officer in his last fight for freedom in 1793.

Le Signe du Triomphe (outside show) - Experience the frenzy of the Roman Circus! To save their lives, the Gaulish prisoners must win the circus games in front of the Roman governor. Are you ready? Take your seats in the Gallo-Roman Stadium and prepare to be transported by the intense atmosphere.

Les Vikings (outside show) - Tremble at the sight of terrifying Viking warriors launching their attack! Emerging from their longships surrounded by gigantic flames, the ferocious Vikings attack the peaceful Fort de l'An Mil with its thatched roofs. At the foot of a 22 metre tower, the battle rages on in a deluge of special effects.

Le Bal des Oiseaux Fantômes (outside show) - Eleanor of Aquitaine awakes in the ruins of the old château and her memories make the falcons, owls and vultures emerge, skimming past your heads with their enormous wings.

Le Secret de la Lance (outside show) - Experience a medieval adventure on a grand scale. After the knights' departure for Orléans, Marguerite, a young shepherdess, remains alone at the château. She will need to discover the secret of a lance with amazing powers so she can protect the enchanted ramparts of the château in the midst of a battle.

Mousquetaire de Richelieu (inside show) - Experience an exciting adventure including sword fights, flamenco dancing and capering horses. Set in a monumental 17th century theatre, the musketeers will transport you back in time for an astonishing swashbuckling show.

Les Chevaliers de la Table Ronde (outside show) - Dive in to the wonderful world of Arthurian legend at Puy du Fou! Below the ramparts, Merlin puts Arthur's bravery to the test. Having beaten the curse of Excalibur, Arthur discovers the wonders of the enchanted lake!

La Cinéscénie (outside show) - Seen by over 12 million spectators, this show involves 2,000 actors on a stage spread over 23 hectares and 28,000 costumes. Lasting for 1 hour 30 minutes, it includes many new attractions. The world's biggest night-time show has become an absolutely unmissable and legendary experience. Over the last few years Cinéscénie has reached a new level with many innovations: new lighting effects, new 3D video projection, and new sets have combined to create 10 new scenes in 6 years with new special effects. Cinéscénie is a sight to behold!

The Cinescenie will blow you away. 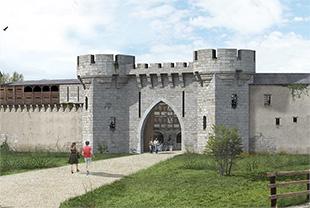 Start your journey through history by staying in one of the fantastic Puy du Fou themed hotels!