Last Update 31st March, 13:00
Coronavirus (COVID-19). Find out more in relation to Coronavirus and if this will impact your holiday here

2 nights escorted tour from Jersey and Guernsey:
from only £499 per person*


*Price includes return flights to Birmingham, fully equipped coach travel, accommodation from the 18th-20th September, rank 3 tickets for André Rieu’s concert at Birmingham Resorts World Arena and Bontour Tour Manager. Price is per person and based on 2 people sharing a room, single supplement of £90 per person. Please see full terms and conditions for all details.

Direct from the Channel Islands

André Rieu is back in the United Kingdom and Ireland for a limited number of performances of his brand new show! Together with his 60 piece Johann Strauss Orchestra, every single show is a spectacular as the maestro plays his world-famous Stradivarius violin, interacts with the audience and conducts his incredible orchestra.

Experience the magic of André Rieu during a memorable evening full of surprises, and see why the Dutch violinist is one of the most popular live acts in the world.

Watch the short video below for a taste of what is to come!

“My concerts are about joy and love! We should make the decisions in our lives with our hearts not our heads. People often ask me ‘how do you choose your program?’ – the answer is: with my heart. I love Johann Strauss but I am also fascinated by Andrew Lloyd Webber or Bruce Springsteen. We should stop limiting ourselves with categories and boundaries – not just in terms of music but in our lives in general.” – André Rieu

Imagine yourself in Vienna or Maastricht for a spellbinding night of music and laughter, without having to travel further than the UK.

The concert will held at the Birmingham Resorts World Arena 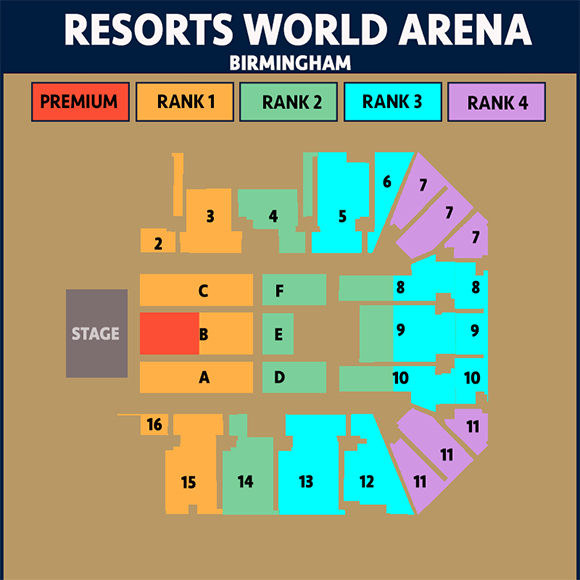 Guernsey clients will board their Aurigny flight at Guernsey Airport at 9:45 which will get them into Birmingham at 11:00. They will be picked up by our coach driver who will take them straight to the central 3* Ibis Styles Central hotel. You’ll then have plenty of time to unpack and unwind before the Jersey clients and Tour Manager arrive.

Jersey clients will be met in departures at Jersey Airport by their Bontour Tour Manager who will escort the tour throughout. The Blue Islands flight will leaves at 11:00 and arrives into Birmingham at 12:20. The coach driver will then drop you off at the hotel where you’ll be able to meet the Guernsey clients and your Tour Manager.

The rest of your time on Friday is yours to spend, with plenty of time explore the bustling centre and make the most of the cities eclectic range of shops and restaurants.

We will enjoy a lazy breakfast at the hotel before spending our day in buzzing Birmingham.

You might want to simply shop in the many high-street stores featuring the most fashionable and famous brands. The Bullring Shopping Centre, with a branch of high-end department store Selfridges, is not to be missed. Alternatively you might pay a visit to one of Birmingham’s fascinating museums or art galleries.

After a full day exploring Birmingham we will prepare for the amazing André Rieu. A true musical phenomenon having sold over 40 million CDs and DVDs worldwide, and performing with his 60 piece Johann Strauss Orchestra, spectators are guaranteed to a surprising, uplifting and emotional evening to remember. Seats in a ‘rank 3’ area afford ample views of all the action on stage. The concert will take place at the Birmingham Resorts World Arena, and we will be transferred by coach from the hotel to the venue and back again.

Day 3: Birmingham to the Channel Islands

Guernsey clients will be up bright and early, feeling refreshed after a night of music and laughter! The coach will pick you up along with the Tour Manager as you head to Birmingham airport. Your flight will leave the airport at 9:45 arriving back at 11:00.

Jersey clients will be picked up a little later from the hotel and the coach will take you to the airport where the tour manager will be waiting for you. Your direct flight for Jersey departs Birmingham Airport at 12:35 arriving at 13:55 with Blue Islands.


Please note the itinerary is subject to change without prior notice.

2 nights escorted tour from Jersey and Guernsey:
from only £499 per person*


*Price includes return flights to Birmingham, fully equipped coach travel, accommodation from the 18th-20th September, rank 3 tickets for André Rieu’s concert at Birmingham Resorts World Arena and Bontour Tour Manager. Price is per person and based on 2 people sharing a room, single supplement of £90 per person. Please see full terms and conditions for all details.